Judge Rhonda Wills is truly a force to be reckoned with.

Judge Rhonda Wills is a dynamic, captivating and compassionate tour de force who is making her mark on TV on the syndicated arbitration-based reality court show, RELATIVE JUSTICE, which centers on resolving inter-family legal disputes.

Since forming her law firm nearly two decades ago, Wills has recovered over $100 million fighting for the rights of everyday Americans in their plight against corporate giants. As her mother and grandmother taught her about society’s injustices from a young age growing up in Winona, Texas, Wills’ life passion has become creating a system that is centered on justice, equality and fairness for all. She uses her expertise and intellect to give voice to those who need her most; the worker who has been wronged by their employer, a person who has been discriminated against, sexually harassed, sexually assaulted and those who have suffered catastrophic physical injuries. She is passionate and fearless about her work, which is evidenced by the unique bond she forms working with her clients and the number of impassioned referrals she receives based on her enormous successes.

Wills sees the show as an extension of her efforts to keep everything principled and balanced. One of five children and a wife and mother of four, she has experienced similar family dynamics and scenarios to many of those who appear before her in her courtroom. On Relative Justice, Wills dispenses legal advice with a nod toward rebuilding relationships to get beyond current family conflicts. Using her life experiences along with her legal expertise to propel her judgements, Judge Rhonda presides with grace, thoughtful compassion, and tough love to not only resolve litigants’ legal disputes, but to work towards bringing families back together in the process.

Wills graduated from the University of Texas at Austin with a BBA in International Business, and later from University of Texas School of Law. She is licensed to practice law in Texas, California and New York and has been admitted to argue before the United States Supreme Court. Wills’ firm, the Wills Law Firm, PLLC is headquartered in Houston, Texas with a satellite office in Los Angeles. 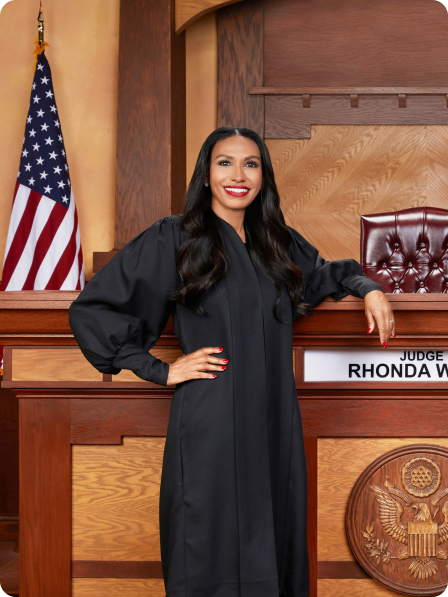